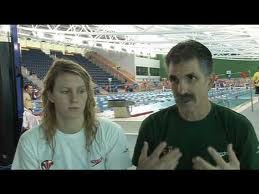 If you don't know much about Coach Bud McAllister, here's a bio from his ASCA Hall of Fame induction (2007): http://www.swimmingcoach.org/hof/coaches/mcallisterbudinfo.html .  Since 2007, he has spent time coaching in Canada and Great Britain -- and is currently coaching British Distance Phenom Jazz Carlin, who has been 8:18/15:47/4:04 in the 800/1500/400 Freestyles so far this year.
Coach McAllister is best know as Janet Evans' coach through the Olympics in 1988 when she won Gold in the 800 and 400 Freestyle.
I referenced Coach McAllister in my blog earlier this week, found here: http://createperformance.blogspot.com/2013/07/more-on-volume-velocity-and-rhythm.html
I'll briefly restate that as a young athlete I was privy to the types of sets Coach McAllister was doing with Janet Evans because my coach Murray Stephens told his NBAC swimmers from the early 90s all about Janet's training, and as far as he knew about what Coach McAllister was asking for. That knowledge spread through NBAC, and certainly through me as I eventually became an NBAC coach in 2001.  My athletes have always done Coach McAllister's style of sets, as I did back in the 90s.
Here is a description of a certain type of work Coach McAllister put out there in the late 80s, which I still use often in 2013.  Following is my take on what is going on within the set.  I have never spoken to Coach McAllister about these sets, so my take is simply my viewpoint -- and I only surmise that I'm correct about what sort of idea he was after.
Take this SCY set, for example:

1x150 Free (150) + 3x150 Free (135)
2x150 Free (145) + 2x150 Free (130)
3x150 Free (140) + 1x150 Free (125)
I used to do this one a lot as an athlete, and we did the same thing for 200s, 300s, 400s, and 100s – pretty much every week it seemed like, in the early 90s. We would flip it around and go 3-1, 2-2, 1-3 sometimes as well.
It's important to get the concept of the set, which is this: the left side is more moderate than the right side (which is the faster part), but as you go through the set, the interval on the moderate side descends, AND you've got to do more moderate at one time, on a faster moderate interval. So you can't just do something fast, and then fall apart like many of our athletes like to do. The additional moderate swimming, even though it's on a tougher interval, provides added active recovery throughout the set.  But it's the kind of recovery that forces the athlete to swim with their best stroke.  The stroke technique must remain consistently strong on the moderate part, and because the pace never strays too far from racing pace the stroke technique will never stray too far from the athlete's racing stroke.

This morning I had one of my distance guys do a prep set for Zones next week, and we used this style of set.

The athlete has to pick it up doing a portion of the set, then ease it back down for the next portion – but in part due to the intervals (which get quicker), the athlete can’t go into “slop mode”.   After the moderate “honest” portion in the middle of the set (the first set of 2x100), the athlete must then swim a strong set of 2 on the fastest interval of the set – which leads into the set of 3x100 on 1:25, which are moderate, but ideally they are the same pace as the other moderate 100s at the beginning of the set.  My athlete did this pretty well.  I'd have preferred he didn't go up to 108 on the first of 3x100 (1:25), but other than that I thought it was pretty good for a 4:07/8:29/16:27 guy.

If this set were done six weeks ago, the intervals would be (:05) faster than they are here.  But my athlete is swimming a “Zone” meet in a few days so I wanted to make sure he was successful and didn’t get into struggle mode.
Posted by NBAC Performance at Friday, July 26, 2013