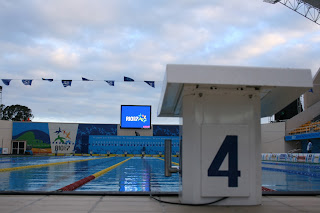 I love watching athletes swim fast in practice and in competition. Watching athletes swim slowly up and down the pool? -- well...not so much!  Certainly there are many coaches out there who are with me on this issue.
I believe that in many cases, a coach’s general stance on “getting the young kids into distance swimming” is well-intentioned – but at times can be a bit misguided.  What is it we are really trying to do?  Certainly much of our thought process is guided by which side of the fence we are on:  are we trying to get a National Qualifier out of our training squad, or are we trying to get a World Record Holder/Olympian?


(We should always treat our 10-12 year olds like they are all going to be a World Record Holder.  We will realize later that the vast majority will never do it, but at least we will have done it right for the one or two that need to be treated that way! – and for the rest, we will have gotten the most out of them.)


These are just my thoughts, and I’m probably both right and wrong (there are always exceptions to the “rule”)….but we should consider training our athletes to move up in distance instead of down, as they get older.   Let’s train them for distance early, but race them for distance late!


Consider 2012 US Olympic 1500 swimmer Connor Jaeger’s story.  Connor swam with the Central Jersey Aquatic Club growing up, and developed into a strong 400IMer, and particularly in the later years of High School he developed a strong 400M and 200M Freestyle.  At the University of Michigan, when he was 20 years old, he raced his first 1500 (according to the USA Swimming database).  Seven months later, on his 5th 1500 ever, Connor made the US Olympic Team in the 1500.  Connor’s 1500 in London was his 6th 1500 ever!  Here is the breakdown:


Connor made the Olympic Team in an event he had only done 3 times in his life!  One advantage to this was that he never gained experience racing the distance slow.  By the time he started competing in the 1500 he was ready to hold 102s.  Maybe there is something to that.


Take a look at two-time Olympian Katie Hoff’s progression in the 1650.


To be clear: I’m not suggesting that everyone has to hold off swimming the mile until they can set a big record in the event.  There is GREAT value in putting young kids in these events when they can either win locally, or make the top 10 list Nationally.  If we have kids who can do these things, as coaches we need to give the chance to do it – because the confidence they build at meets (winning or getting National recognition) is irreplaceable.  If you have someone who can win, or perhaps drop time in the mile when they haven’t had a time drop in anything for 3 months, then they HAVE to do it.  That is coaching.  But we have to have gone through that particular thought process with the event.  It’s not like the 100 Free, which to me is an event an athlete can and should race many times every year.


Please understand: the examples I’ve used are the extremes – but they do show that it can be done, and perhaps the examples will make us think.   I do believe that many 11-13 year old girls and 12-14 year old guys should race the mile 2 times per year SCY and 1-2 times per year LCM…but I think we have to watch it with the particular personalities and perhaps try to encourage their performance in the 200/400 with more intensity.   We should consider waiting until they can swim a good 100/200 when they are 10-11 before putting them in the 400/800 – even if the 400/800 are the only events offered on the day.   I believe that we should train them for the mile and the 400 IM at all times after age 10 (and before age 11, for the 100 Free and the 200IM)….but just because we are training them for something doesn’t mean we need to race it 6-8 times per year at the younger ages.  We are all in this for the Long Term!
Posted by NBAC Performance at Monday, June 10, 2013