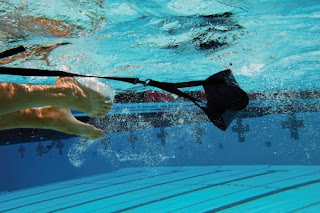 Check out this link to purchase a Parachute from FINIS: http://www.finisinc.com/swim-parachute-8-inch.html  Parachutes (pictured above) are a relatively cheap way to get in some effective resistance training.

Part One: Power Tower 25 with 30lbs in the tub.  Tempo at race tempo (or race tempo plus .1)
Part Two: easy back to the wall and rest :45
Part Three: "Phantom Wall" into fast turn plus breakout and 15 M fast, all done with 100M Freestyle breathing pattern.

This season, the overall rest will probably be cut in half and the weight will be taken to another level!

You may wonder about the 30lbs in the tub.  Erika could definetely pull more!  But we adhere to the 10% philosophy when we're doing resistance (and assistance) training.  The point is: To swim with "race stroke", the athlete must be no more than 10% slower, or faster, in terms of a) stroke rate, and 2) velocity (time).  Erika is actually to the point now where she has moved up from 30lbs, and we hope to go higher -- without sacrificing the stroke we'd like to train.

Check out Vern Gambetta's article "Speeding Up" where he writes about the "Rule of 10 percent".
http://www.momentummedia.com/articles/tc/tc1209/speedup.htm Mr. Gambetta writes:

"How heavy is too heavy? The 10-percent rule holds true. Generally, the resistance should not exceed 10 percent of the athlete’s bodyweight. A corollary to the 10-percent rule is that it should slow the athlete down no more than 10 percent of his or her best time for the distance he or she is towing. If the resistance is so heavy that it does not resemble the dynamics of sprinting, then there is a real chance that there will not be any benefit to performance on the track, field, or court."