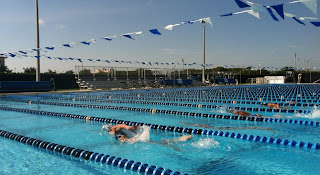 Improving breakout/swimming body position creates higher levels of propulsion from the athlete's kick.  In this photo Erika Erndl is breaking out with her heels, hips, and head -- simultaneously.  Erika's kick is affecting her propulsion in a 100% positive way by directing movement 100% forward along the horizontal surface of the water.

If her feet were 8 inches underwater as her head broke the surface, the kick would be doing work, but directionally the kick would be pushing her body up instead of forward.  Because the law of gravity won't allow her to continue upward (humans are not dolphins), the 8 inch depth of the feet make for an inefficient kick -- no matter how powerful it may be.