Training and Competiting with an Edge

For those of you who follow NFL Football, you have recently learned that the Cleveland Browns have traded their young Running Back Trent Richardson to the Indianapolis Colts, in exchange for the Colt's 1st round draft pick in 2014.

It's a bold move by both teams.  The Browns have essentially conceded their season two games in, and are starting to prepare for two high draft picks next year, while the Colts are obtaining a much-needed running back to go with their prodigious Quarterback, Andrew Luck.

It's curious to me what Trent Richardson has said in wake of this trade. Keep in mind that Trent has shown flashes of greatness, but overall has not been outstanding (albeit while playing for a sub-par team in the Browns).  Yesterday, after learning about the trade, Trent was quoted as saying:

“I’m going to get studying on my playbook and get ready to go against San Francisco,” he said. “When I do go in this weekend, I’ll be playing with a big chip on my shoulder. I play like that every week but this week I feel like I got a lot to prove to people.”

A big chip on his shoulder?  Now he's going to up his game?  To prove that he shouldn't have been traded?  I understand his statement, and I have no doubt that his effort will be higher than it has been.  And that is my point.  Where has this edge been for the last year, if it's true that NOW he is going to up his game?

Athletes with an "Edge" are the best athletes to have on your team, and they are the toughest to deal with in competition.  Sometimes it takes disappointment to find that edge.  The Michael Phleps', the Michael Jordan's, and the Tom Brady's of the world have that "Edge" every day of their lives.  They hate losing, and take it personal when they don't perform their best -- and they carry that disappointment through months and years of time.  They don't get disappointed for a day and carry it through the end of the week.  The get disappointed and carry it through redemption...however long it takes. 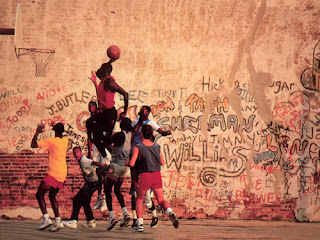 Recently, at the World Junior Championships I spoke with an athlete who had finished his last individual race.  He had hoped to win an individual medal, but fell short.  He had raced well and performed his lifetime best time, but of course he wanted to stand on the medal stand after the race.  Instead, he stood next to me.  I asked him what he had learned.

He said, "I know now that I have to work harder, and improve the little things in practice."  His expression told me that he knew his walls and his skills were not in line with his fitness -- and without the skill work he would continue to fall short.  He wasn't thinking about the race at all.  He did everything he had trained to do.  His expressions told me that he was thinking about his practices and all the hours of wasted effort training at 95%.

I thought this swimmer's comment was right on.  And it's coming from one of the best 18 and under athletes in the history of the USA.  At 17 years old, he was learning young that you have to bring that edge to practice and competition every day, and practice being that edgy athlete all of the time -- or risk disappointment at the end of the season.  What he had done, to get to be the best 18 and under in the USA, simply wasn't good enough!