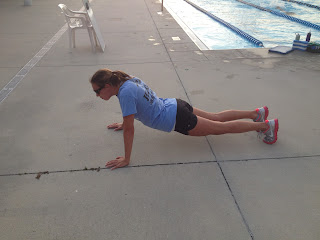 Am I the only coach that has a problem with this pushup position?  It's not really a pushup unless an athlete can establish a plank position with their arms fully extended, and maintain a plank position all the way through the motion. At some point, a weaker athlete will break their plank on the way up or on the way down during the movement.  So how do we go about building the strength to actually DO a real pushup?  First, we have to work on planks (holding proper plank position while breathing calmly, for extended periods of time).  Once our athletes can hold a plank they can actually DO the pushup   within a few weeks if they use this simple progression -- which breaks the pushup into two simple parts.

Here's the progression:  First, situate the athlete on the ground (fully touching the ground with their entire torso).  The athlete's palms should be placed under and slightly behind their shoulder.
This is an easy position to accomplish! 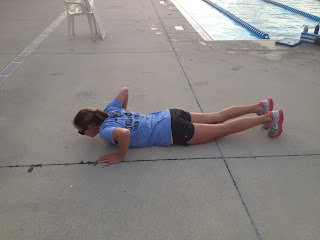 Next, ask the athlete to go directly from the first position into a plank.  The back should be flat, and the neck should be long and flat.  The athlete's eyes should look at the ground 6-12 inches in front of their hands.  Take care to allow the hips to rise simultaneously with the chest (the toughest part for many). Many athletes who are terrible at pushups can actually DO this "modified pushup".  So, my suggestion to them is to go through a "modified" pushup set, pausing on the ground as needed between reps (a full second is good enough for most although some may need a few seconds).  I'd prefer one second rest between repeats if it means the athlete will keep her back flat and connected through the entire motion.  Soon, a weak athlete will be able to do a few "real" pushups, and then it's just a matter of time and continuous focused work to get consistently good at sets of 10 or 15 at a time. 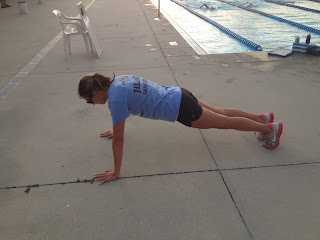 Why do we spend time allowing athletes to do terrible pushups?  Do we think that an athlete should struggle for a while, somehow gain strength through poorly-formed efforts, and eventually get strong enough to do a "real" pushup?  I am certain an athlete will be unsuccessful at forming a good pushup if all they do is perform unsuccessful pushups.  Let's consider ways to break the exercise into parts, so that eventually we can put good parts together, creating a strong full movement.
Posted by NBAC Performance at Thursday, September 06, 2012